You may also be interested in: Plays | Screenplays  | Picture Books  | New Play Exchange
​

Dramatization of Mark Twain's comic short story, The Capitoline Venus.
Destitute artist George Arnold wishes to marry Mary, but her father refuses to give permission
unless George can provide $50,000 within six months. At a loss, George turns to a business
friend, John Smithee, who agrees to help, but only if George is willing to give up his greatest
creation yet.
​

A star quarterback goes on offense against his coaches, and the new laws requiring he use the locker room of the gender assigned at birth.
2019 Boston Theatre Marathon - Israeli Stage. Directed by Guy Ben-Aharon.
​2020 Theatre One Productions Slice of Life New Works Festival.
​

Two young women, feeling lost and un-empowered, call upon the powers of the Goddess Thesis to open up their world.
Written for SHOTZ! Boston and performed summer 2014. Directed by Harsh Gagoomal.
​

An assassin from the future arrives suddenly in the living room of the woman who will invent a time machine. But what happens when a would-be-assassin of time travel comes up against the inventor of it?
Written for SHOTZ! Boston and performed in the Fall of 2013. Directed by Lindsay Eagle.
​

Myrtle the Turtle and Peggy Penguin escape from the New England Aquarium to track down and get vengeance on the Red Rapscallion who captured them.
Written for the 2011 T Plays, presented by Mill 6 Collaborative.

A drag queen and a Sox fan take the last D Train home together.
Written for the 2010 T Plays, presented by Mill 6 Collaborative, where it won the Golden Dolphin Audience Favorite Award.
Produced by Point of Contention in Chicago, November 2010.  Read a review of the festival.
Produced by Turtle Lane Playhouse for the 2011 Boston Theatre Marathon.
​

Produced by Exquisite Corps, Sept. 2009.
Raymond is tired of leading a life of quiet desperation, so he abandons his fiance, in search of his own, solitary, personal Walden Pond. But its hard to stay alone when you're a vampire.
​

co-written with Dawn M. Simmons
Produced by New Exhibition Room at FeverFest, 2009.  Featured in the Boston Globe.
Harold has heard the voice. He's put on his dancing shoes and taken up his cross.
​Mama gonna be so proud.
​ 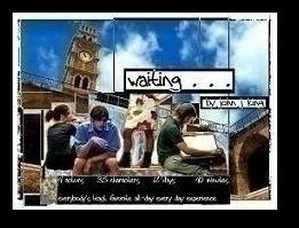 Written and Directed by John J King
Produced at the New England Fringe Festival, 2008.
9 plays, 27 character, 40 minutes.
Want To Peruse?
STUTTER: 1 man 1 woman.  As his caregiver gets him ready for the day, William - a young man with cerebral palsy - gets ready for a surprise confession.
ORGANS:A young woman and a strange man share a moment in a hospital waiting room.

Small Scarlett and the Piggly Bears | 2005

A delightful mash-up of Little Red Riding Hood, the Three Little Pigs, and Goldilocks and the Three Bears.  Perfect for kids.  Soon to be a radio play available for download.  Click the title to download
​

Vlad (the impaler) is a young virginal knight on a quest to save his true love and with the help of his Fairy Cockfather.  A traditional knight-errant tale with an evil stepmother, a hero, and damsel in distress, except all the characters are genitals.
Produced at SUNY Geneseo, May 2003.
Produced 2014 by Heart & Dagger Productions at SEX FEST II. Directed by Joey Frangieh.
john j king  |  johnjking80@gmail.com  | new york, ny